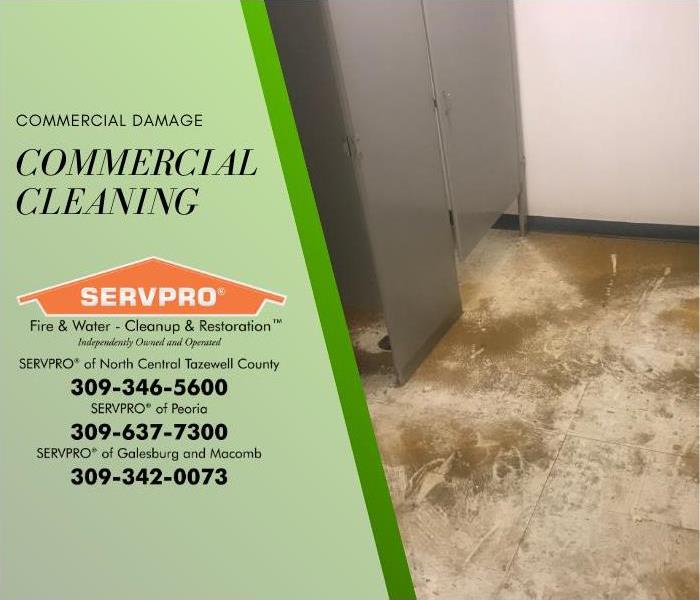 The circumstances that lead to this damage isn’t important. What is important is the fact that this is NOT something you would want a client walking into if you were a business owner. Your local SERVPRO® is staffed with trained professionals who know exactly how important it is to keep your establishment clean and presentable. So if your business looks like this at some point, reach out to us. We’re Here to Help®. 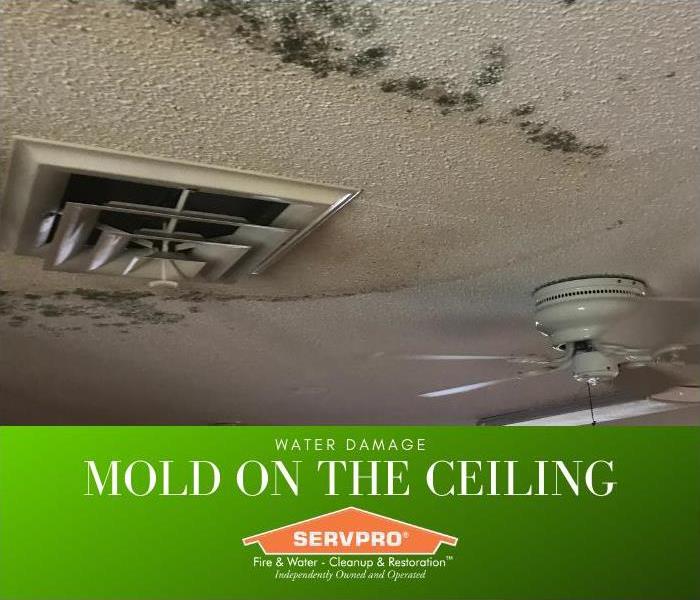 This is the result of the same damage from a previous post. It is important for commercial buildings that have been closed for business to be maintained. The unattended sprinkler system in this building was set off and the entire building was unknowingly covered in water, which when left alone, lead to mold.

If you ever find yourself in this predicament, please reach out to your local SERVPRO®. 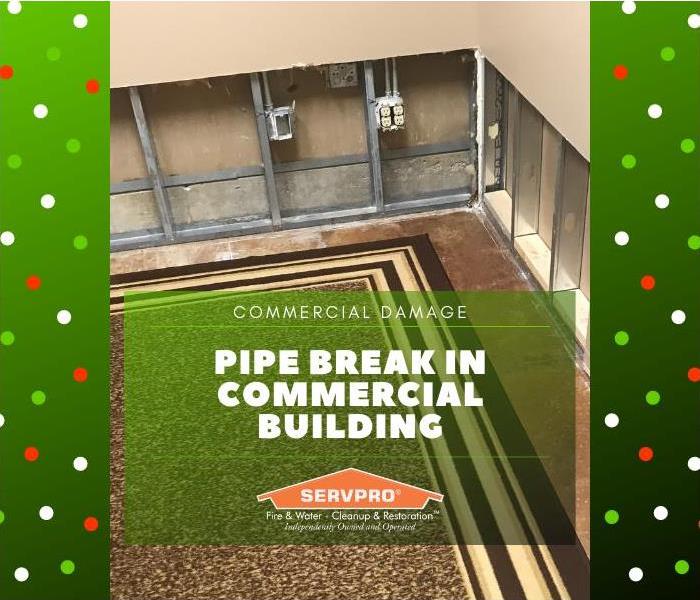 This office had a pipe break and water got everywhere. Due to the type of business that was done in the building, it was important that it was dealt with fast and efficiently. So the people who work in the building made the move to call us for the cleaning and restoration. 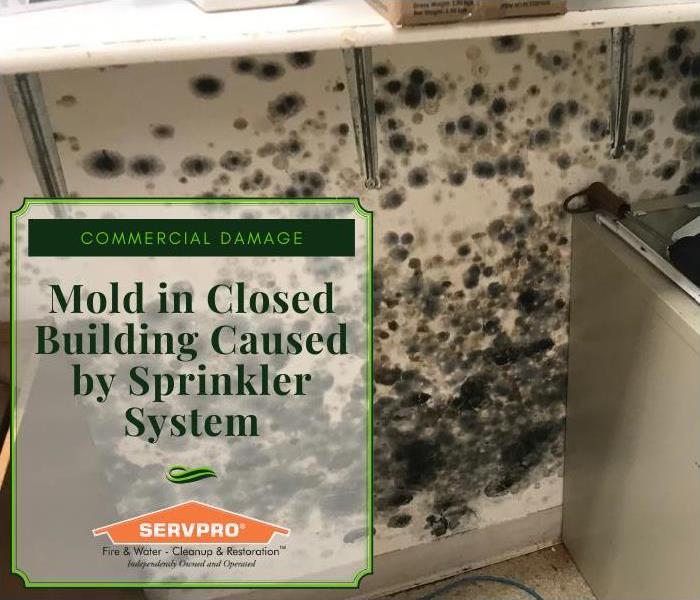 Closed or abandoned buildings don’t always get the attention or maintenance that they need. If they are not properly monitored, situations like this can occur. You are looking at damage left after the building sprinkler system went off in a building that was closed down. The water wasn’t cleaned up, and mold started to grow in every place that was left wet.

Don’t underestimate the damage water can do if it isn’t cleaned up. Secondary damage is easy to avoid if you are proactive about water damage. 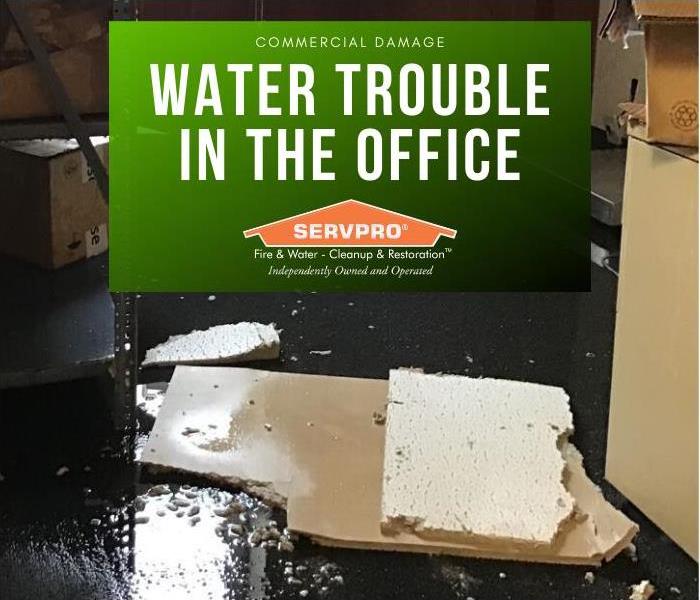 Water Trouble in the Office

This office building was wracked with water damage recently. Water ended up filling up office and storage areas alike. In this particular room, you can see that the carpet is soaked and there are parts of the ceiling on the floor. There were plenty more rooms like this. Water damage of this magnitude has the potential to slow the way a business runs. That is why the client made the choice to call us and get the water dried out and the building restored by our teams. 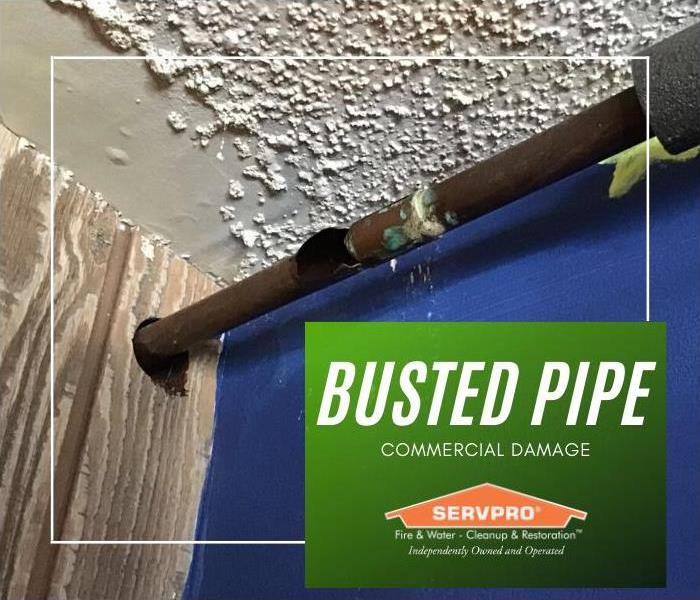 When a pipe bursts for whatever reason, there are varying degrees to the damage that can be done to the pipe. Sometimes pipes will split into just a small crack in the metal. Sometimes they will split in a way that looks like a compressed tube of crescent rolls will. On the far end of the spectrum, you will have a burst like the one here which looks like explosives were involved. With a break this severe, this commercial building was soaked in multiple rooms. That is why they called for our teams here at SERVPRO® to do the water cleanup and restoration. 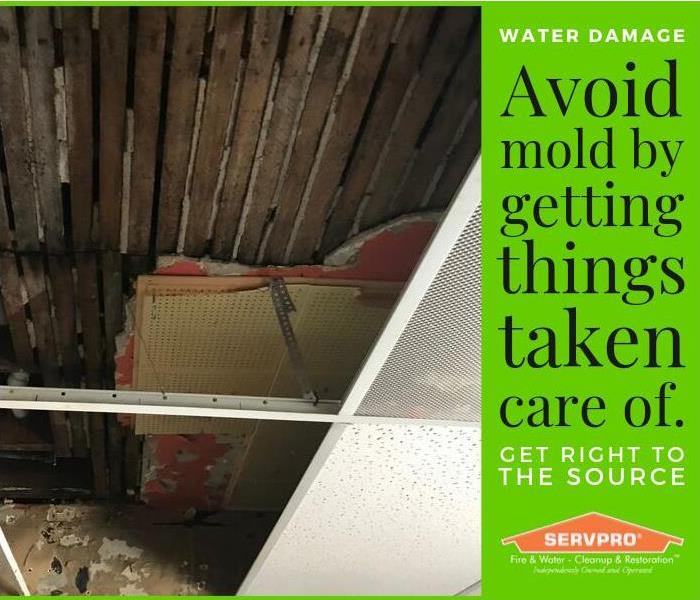 It’s important to know how to get to the source of the issue when it comes to water damage. When that damage is in the ceiling the only real way to get to it is to go through it. In this office building, it was a little easier because our teams were able to pop the ceiling tiles off and get them out of the way. Just remember, whether the source is more or less accessible, you can always count on SERVPRO® to make the water damage feel “Like it never even happened.” 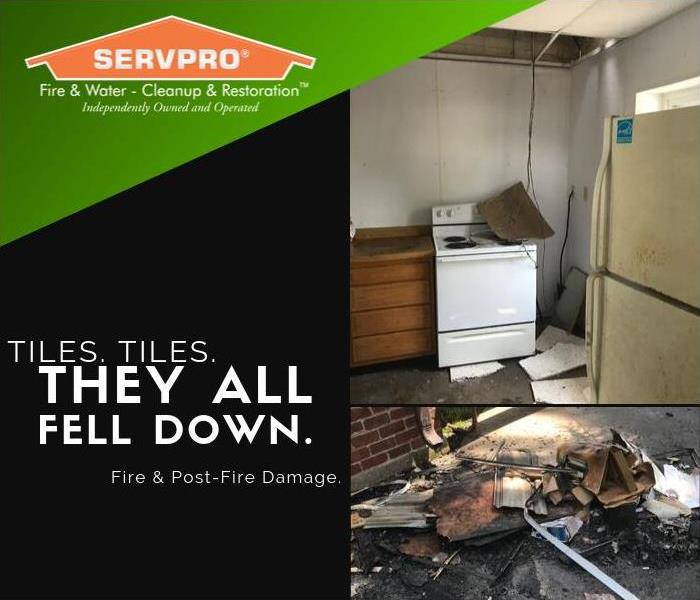 These photos show the true two damages when a building catches fire. There is the initial damage from the fire, and there is the water damage that comes afterward. Luckily, our teams at SERVPRO® can clean and restore both types of damage. 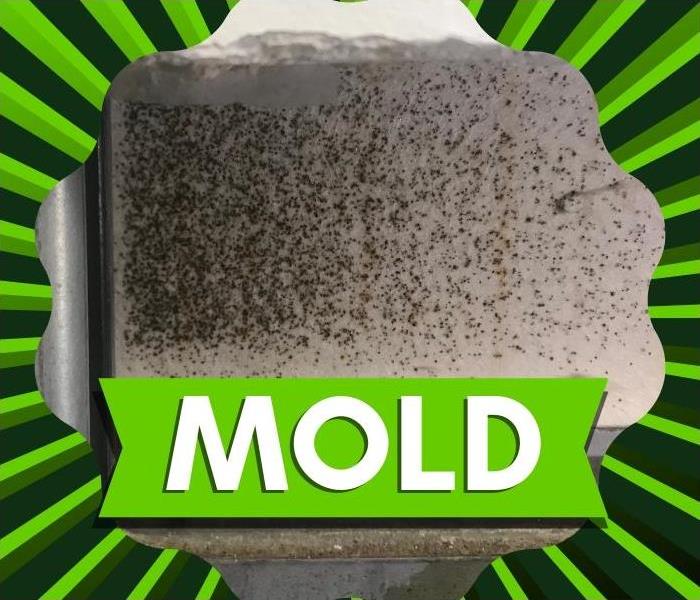 Mold is not just an issue for damp residential basements. Mold can appear in any spot that isn’t dry or well ventilated. This means residential buildings aren’t the only ones at risk. Commercial buildings are just as likely to experience it. Of course, this doesn’t mean that commercial buildings/businesses that end up with mold are poorly maintained. It takes something as simple as a big storm or excess humidity to cause this issue.

SERVPRO® teams are specially trained on how to handle mold and are not at all afraid of a challenge. 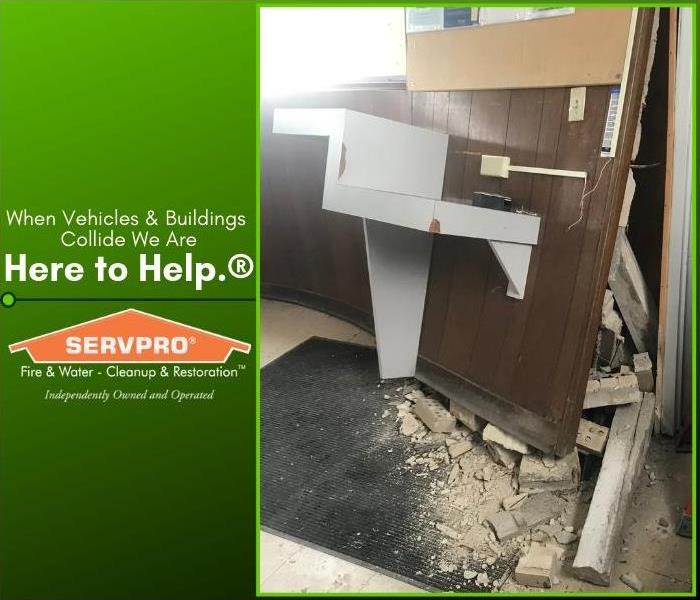 The last thing anyone expects is for a four-wheeled machine to come bursting through the front of your home or business. Even if there’s nobody inside the building, it can be one of the most dangerous situations. The picture here is of the damage from that exact situation that occurred at a post office. The front of the building all but collapsed and they called in our SERVPRO® Heroes to clean and restore the damage. When something as important as mail is involved, it is important to get the job done as soon as possible, and they called us just in time!

Recently in local news, it’s been known that the Pekin Library has finally opened its doors again. The library was shut down after a storm at the end of last year caused a flood and sewage backup that affected most of the building (an example of the damage is shown in the attached photo). Our teams were called in for the cleanup and after a couple of months not only cleaning the building but also taking care of the books inside it, the doors reopened and business is as usual!

For a good comparison, please go check out our before and after section. The difference will amaze you! 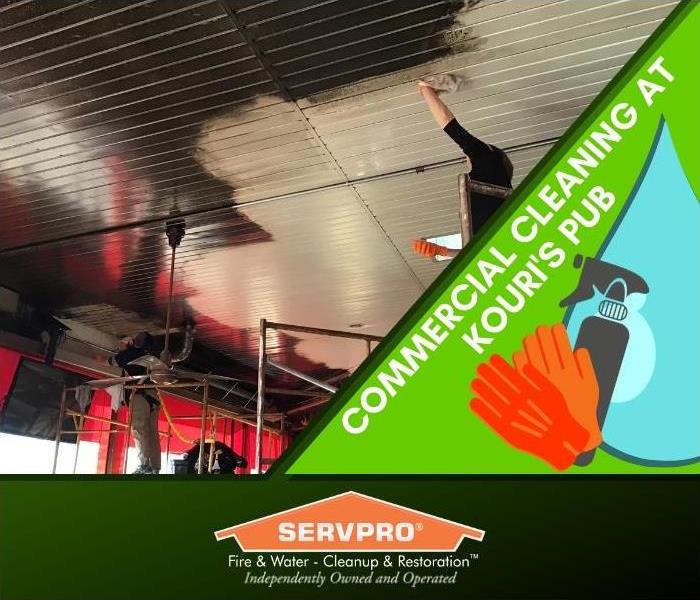 At the end of 2018, we were called to take care of Kouri’s Pub in Pekin Illinois. The ceiling was in desperate need of deep cleaning and we were more than happy to come out and help (especially since our contents crew had a chance to work in a toasty warm area during the cold winter months).

For a fun look at the dramatic change from beginning to end, go check out our before and after picture section. 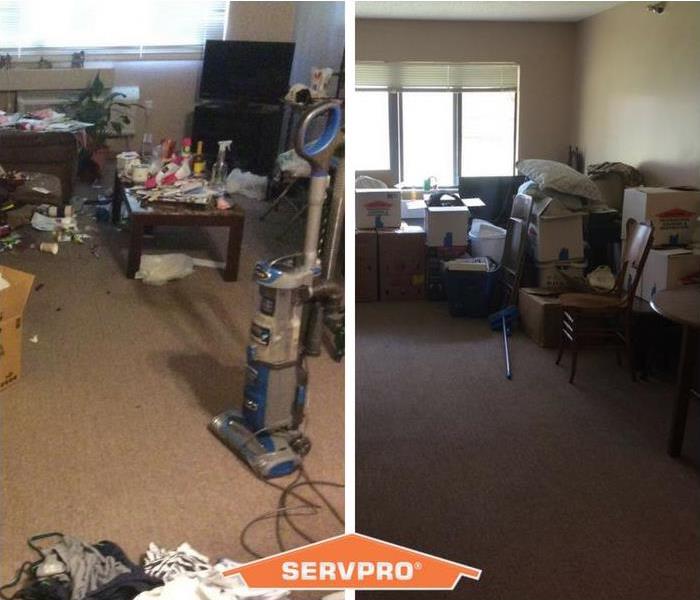 When you deal with some renters, sometimes things get messy & disgusting.

SERVPRO has the tools and technicians to clean up after your nightmare renters vacate your property leaving behind an absolute disaster! 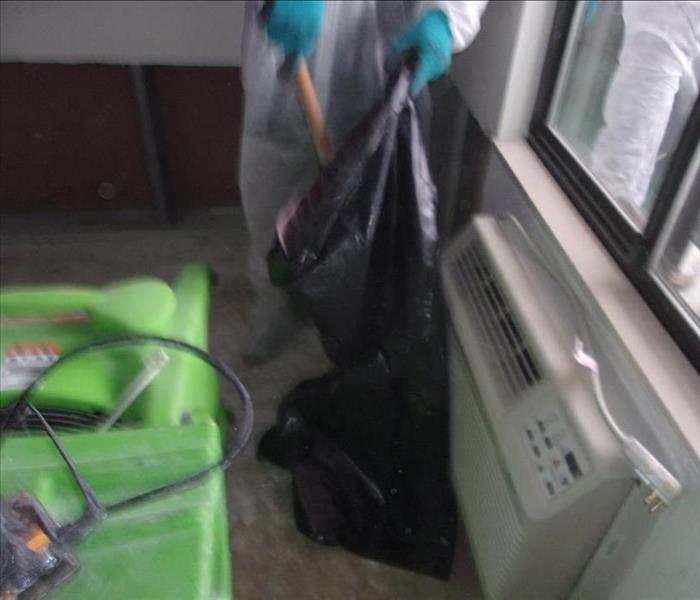 This hotel was flooded by an enormous water main burst.

The owner was so thankful when we showed up with our professional equipment to fix this hotel water damage in North Central Tazewell County as well as extremely satisfied with the results. 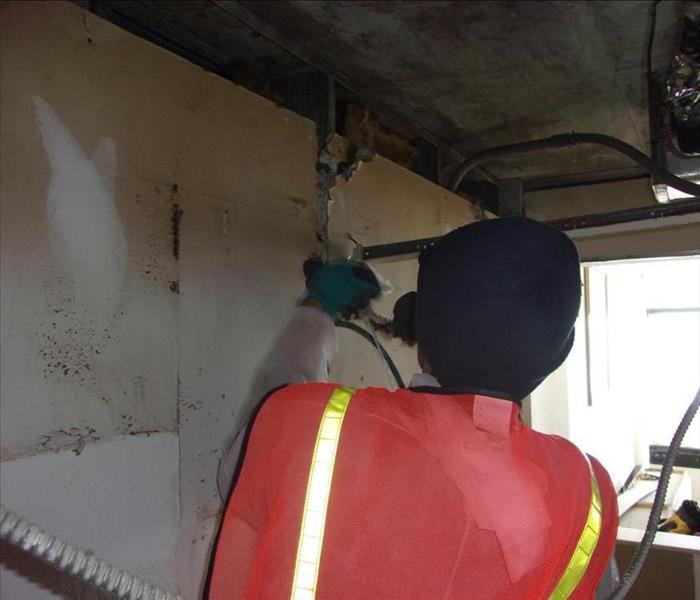 This hotel was flooded by a huge water main burst.

The owner was so thankful when we showed up with our professional equipment to fix this hotel water damage in North Central Tazewell County as well as extremely satisfied with the results. 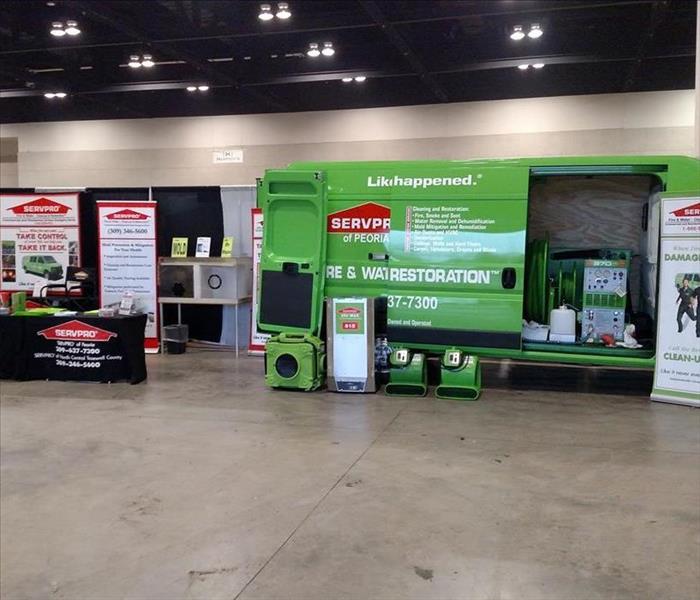 We are set up with all of the proper state of the art technical equipment to handle any size fire, water, or mold project or damage you might be experiencing. 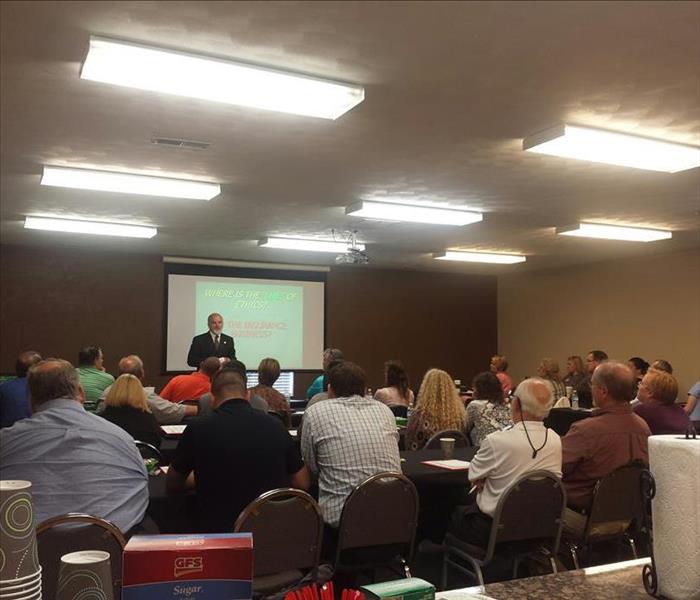 We had a full house for our September CE Classes!

We held a Ethics and a Commercial Lines - Advanced Underwriting for Insurance Agents!

Huge thank you to our awesome instructor Todd David with the Davis Insurance Agency, everyone always enjoys his classes! 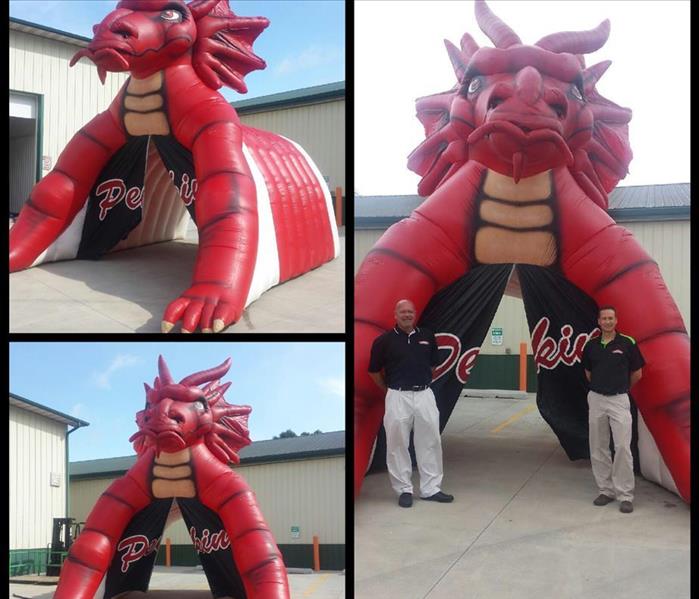 Our Project Managers Dave Schimmelpfennig and Eric Henson are proud to be alumni of Pekin High School! Eric is the President of Pekin Dragon JFL this year.

We love to support our local schools!